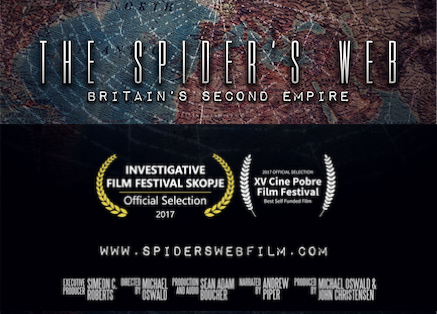 The Spider’s Web: Britain’s Second Empire, is a documentary film that shows how Britain transformed from a colonial power into a global financial power. At the demise of empire, City of London financial interests created a web of offshore secrecy jurisdictions that captured wealth from across the globe and hid it behind obscure financial structures in a web of offshore islands. Today, up to half of global offshore wealth may be hidden in British offshore jurisdictions and Britain and its offshore jurisdictions are the largest global players in the world of international finance. How did this come about, and what impact does it have on the world today? This is what the Spider’s Web sets out to investigate.

With contributions from leading experts, academics, former insiders and campaigners for social justice, the use of stylized b-roll and archive footage, the Spider’s Web reveals how in the world of international finance, corruption and secrecy have prevailed over regulation and transparency, and the UK is right at the heart of this.

Nicholas Shaxson’s “Treasure Islands” had been on my reading list for many years, by the time I finally picked it up I did so not expecting that it would take me on a journey to a documentary. Tax Havens and financial secrecy are never out of the press these days, and so when I made contact with Nicholas Shaxson to see if he would be willing to take part in yet another documentary on the topic he replied he would but diplomatically added that, “the field is slowly becoming more crowded.” After reading “Treasure Islands,” I realized that there was an interesting, coherent and self-contained story that had not been told, the story of Britain’s transformation from a colonial power to a financial power, and the myriad and obscure financial structures created by City of London financial interests that lie at the heart of this transformation. Today, Britain and its dependencies are by far the largest global player in the world of financial secrecy and international finance. This documentary explores how Britain came to hold this position and what impact this has had on Britain and the world.

After 4 months of research and writing, the various parts of the story began to fall into place. It also became apparent that there was one person who had already figured out the story, that person was John Christensen, a former economic adviser to Jersey and the co-founder of the Tax Justice Network. John Christensen agreed to be a producer on this film and his expertise and experience have been invaluable in its production.

I’d also like to give special thanks to Sean Boucher who spent 4 months working with me and wrote the majority of the soundtrack, and Executive

Producer Simeon Roberts who will make sure the film reaches the widest possible audience. It would take too long to individually thank every person who contributed to the film, or the numerous translators who will be making the film available in their respective languages. This film received no funding, it is thanks to everyone who was willing to give their time and expertise that its creation was possible. We sent hundreds of emails to broadcasters and funding bodies, but not a single one deemed the film worthy of support. We disagree, we think this film is interesting and relevant in today’s world and we hope you think so too.

In the days of Empire, Britain transferred the mineral and commodity wealth of its imperial possessions back to Britain. Britain’s tax haven empire is a modern version of this wealth extraction. Britain is a complex country where corruption is hidden behind multiple layers and those ultimately responsible are difficult to identify. I hope this film will help shine a light on part of this obscurity and contribute to the creation of a world where financial rules and regulations are to the relative benefit of all players and apply to all participants equally regardless of their position or importance.

In 1956, with its Empire collapsing in the wake of the Suez crisis, Britain faced political and economic crisis. As Sterling came under intense pressure, the Bank of England took an extraordinary step; without fanfare or public scrutiny it allowed London-based banks to shift their international lending from pounds to dollars.

Importantly, the Bank chose to not regulate this new ‘offshore’ market since these transactions could be deemed to be happening ‘elsewhere’, even though in reality the trades occurred in British sovereign space. Quite where ‘elsewhere’ is was of no concern to the Bank; the important thing, from the point of view of London banks, was that no other regulatory authority – not even the U.S. Federal Reserve – had the power to regulate this new market, which became known as the Eurodollar market.

I was born in 1956 and grew up in the British Channel Island of Jersey. As a teenager I witnessed Jersey’s transformation into an offshore satellite of the City of London. In the 1960s, as the Eurodollar market exploded in scale, British banks (not to mention banks from Canada, France, Germany, India, the Netherlands, Switzerland and the United States), rushed to take part in this unregulated bonanza, and then established offshore subsidiaries and branches in Saint Helier where they could book their profitable trades without paying UK taxes.

Business boomed. And not only in Jersey. With support from British government departments, other British dependencies vied for a slice of the action. Bermuda chased the offshore reinsurance market. The British

By the mid-1970s, as I left school, the Eurodollar market had grown so big that it was larger than the global stock of foreign exchange reserves. And with wealth pouring in from across the planet, London and its offshore satellites were booming. For the City bankers and their colleagues in Cayman and the Channel Islands it seemed you truly could have your cake and eat it.

But not everyone was convinced about the merits of this exercise in unregulated financial markets. In February 1978 I joined a working group of Oxfam policy wonks in London. They were discussing the roots of poverty in resource-rich countries African and Latin American countries, and had noticed huge unaccounted outflows of wealth from these continents, almost all of which appeared to head northwards to Europe and North America via offshore secrecy jurisdictions.

While we didn’t fully understand the mechanisms that enabled these outflows, we had no doubt that the scale of capital flight was so enormous that it was thwarting the development of entire nations. We also had no doubt that the City of London was a major player in this process of looting poorer countries of their wealth and in protecting Britain’s secrecy jurisdiction satellites from political attempts – at the United Nations, for example – to rectify the policy and regulatory flaws that enabled capital flight and tax dodging on such an immense scale.

In 1979, after finishing my professional training as a forensic investigator, I decided to make tax havens the focus of my research, first at university and subsequently as an offshore practitioner. That explains why, in 1985, I headed south from London on my motorcycle to Portsmouth and then on by ferry to Jersey, where I worked undercover as an insider for almost thirteen years.

This was the start of a journey into the dark heart of tax havenry, taking me from working for one of the global Big Four accounting firms to being appointed economic adviser to the government of Jersey. Along the way I spoke with hundreds of bankers, lawyers, accountants, officials from the senior Whitehall departments, at the OECD in Paris, and the IMF in Washington, seeing at first hand the downright criminality of the pinstripe infrastructure of professionals who operate from secrecy jurisdictions like Jersey.

I also discovered that secrecy jurisdictions had moved from being minor players on the economic periphery to becoming the beating core of financial capitalism, with London as its epicentre.